When we were looking into adoption the first time around I was scared to death of the idea of having an open adoption. I felt like I would have to share my child… or worse that the birth parent might want to take their child back over time. I was naive. 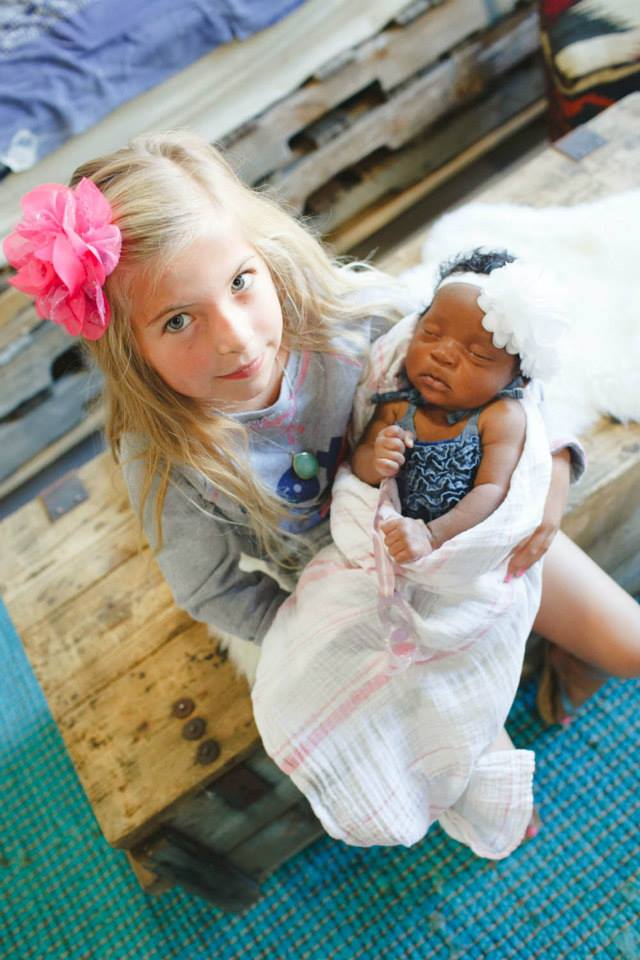 This fear is what initially drove us to adopt through an international program. If you have read Shea’s adoption stories (here or here) you would know that our international adoption program did not turn out as smooth as we had anticipated. And, that is an EXTREME understatement.

So, when we decided we wanted to adopt again we knew that this time we were going in with eyes wide open.

We decided we wanted a private adoption. And, after much research we decided only to accept cases in particular states. States that had laws that protected adoptive parents and finalized adoptions very quickly after birth. This way when the birth mom signed the paperwork we knew the child would be ours forever.

We decided NOT to use an agency, which is what most would do when looking into a private adoption. After our experience with Shea’s adoption we learned that agencies don’t always have the adoptive family… or the birth family’s best interest in mind.

Instead of signing with an agency and waiting for them to find a birth mom we moved forward alone by updating our home study with a social worker and creating our own profile booklet. FYI- a profile booklet basically is a photo album that also tells your family’s story and reasons behind your desire to adopt. These profiles are given to birth mom’s seeking adoption plans. Birth mom’s are able to look through the profiles and find the family they would like to place their baby with.

As soon as our home study and profile were ready I began contacting private adoption attorneys in the states that I was willing to adopt from. I asked if I could send them our profile. Many said they would keep us in mind. Some allowed me to send them our information.

I also researched online for any adoption situations available that would be a good fit. There are many different attorneys that post available birth mom situations on their websites.

It was only about two weeks in to my research when I was contacted by an adoption attorney about a situation. It was exciting but the initial situation did not work out. I wasn’t in a rush so I wasn’t too devastated. I was much more focused on finding the right match this time around than forcing something that wasn’t going to work out.

What did come from that phone call was a relationship. My husband and I both really loved the attorney that we had been talking to. A few weeks later as luck would have it I came across her website and she had another situation available. I called to talk to her about it and she said she thought of us but that the birth family was looking for someone with no kids so we weren’t a good fit. I agreed and hung up the phone.

A few hours later I got a call from the attorney. She said that the birth parents had reviewed all the files she had shown them of childless couples and the birth parents did not find a match. The attorney said she told them that she had one more file in the car but that this family already had four kids. The birth parents asked to see the file- OUR FILE!

She was calling to let us know that we had been accepted and to arrange a date to fly in and meet the birth family so we could both decide if we wanted to move forward.

We received that call at the end of June 2013, we flew out to meet the birth family a few weeks later and fell in love with them. They had already had 3 children and had taken precaution to not have any more. But, the implant that the birth mom had was done incorrectly by a physician and she ended up pregnant.

We left Florida feeling pretty good but still aware that anything could happen.

The birth mom and I continued to get to know each other by talking on the phone at least once a week. Sometimes I got off the phone feeling great… other times I was scared.

In adoption nothing is guaranteed until the final papers are signed. As adoptive parents there is a lot at stake. In private adoption you pay attorney fees and birth mother expenses prior to the baby coming. These expenses are not refunded if the birth mother decides to keep the baby. So, essentially you could lose somewhere between $10-15,000 if that happens. And, the reality is it happens quite often.

As scary and unfair as that sounds for adoptive parents the laws really do make sense. No birth mom should feel she has to give up her baby only because she can’t afford to pay the adoptive parents back. But, at the same time there are mothers that game the system knowing all along they are going to keep the baby too. So, its a double edged sword kind of circumstance.

The weeks went by, some quicker than others and finally the day arrived that we would board the plane and head to Miami. That is where our daughter would be born.

We hugged our older two boys and loaded up the little ones in the car. I remember telling myself if was all in God’s hands and whatever was supposed to happen would happen. I said some prayers and off we went. We were on a red eye flight so we tried to sleep as best as one can on an overnight flight.

When the plane finally landed we were all pretty exhausted. I turned my phone on and was taken a back as it immediately began to rang. I answered it thinking my mom was calling about something for the older boys as she was watching them. But to my surprise it was the BIRTH MOM!!! Her water had broke and we needed to meet her at the hospital immediately.

It was like a scene out of a movie. My heart was racing, we could barely think straight and we were completely thrilled and equally worried all at once. Would we make it to the hospital in time? Would the birth mom still allow me in the room. It was insane. We grabbed our bags hopped in the rental car and sped off to the hospital.

I remember changing in the back of the car as Mike drove on the freeway. The baby needed to meet her mom wearing something other than dirty germ ridden plane clothes.

We pulled up to the hospital and I ran through the doors. I was taken to a room where the birth mom and her own mother were waiting. I had made it! The birth mom was feeling good and they were prepping for surgery. The baby was to be born via cesarean.

The nurses helped me change into the surgery garb and off we went. It was really happening!!! 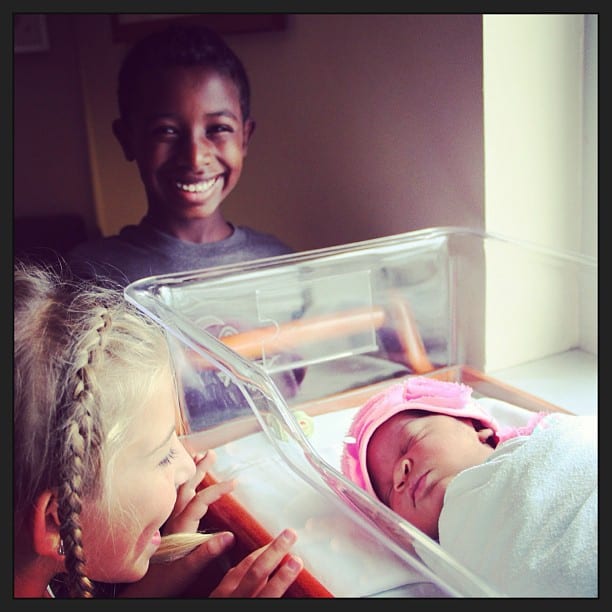 A few hours later a screaming baby girl was born. She was placed into my arms. I held her and rocked her and then I brought her to see her birth mom. They were still finishing the cesarean and I didn’t want to leave the birth mom alone. Those first few minutes of Olivia’s life brought so much peace to my heart. Her birth mom was so genuinely happy that I made it in time for the birth and to be there for her and Olivia. I knew there were still no guarantees but things felt as if they were all falling into place.

The baby and birth mom were both healthy and doing well. The three of us shared a hospital room for three days. This was something that the birth mom had wanted from the beginning and I remember when she mentioned it to me it scared the pants off me! How could I possibly hold her and care for her biological child as an adoptive mother right there in front of her. It seemed almost cruel. Boy was I wrong!

My baby was born into the most loving environment imaginable for an adoption situation. She could her the familiar sounds of her birth parent’s as well as the voices of her adoptive family all at the same time. She was loved, kissed and snuggled by everyone. 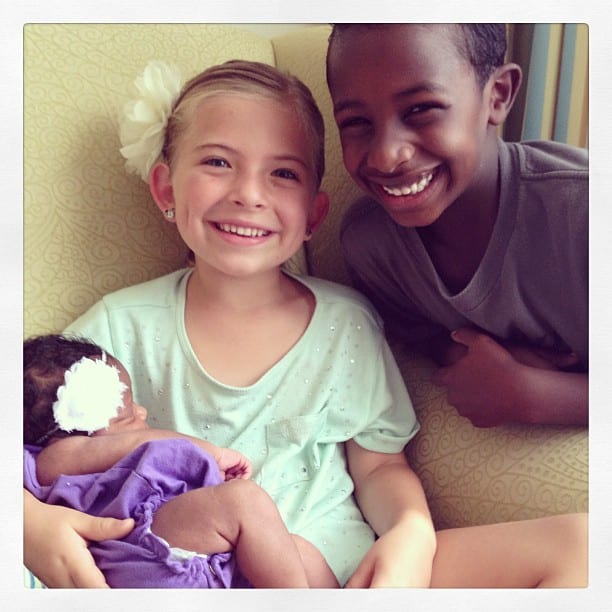 It truly was the absolute most beautiful experience I have ever witnessed. When the time came for all the papers to be signed it became official. Olivia Grace Mamian was ours forever. 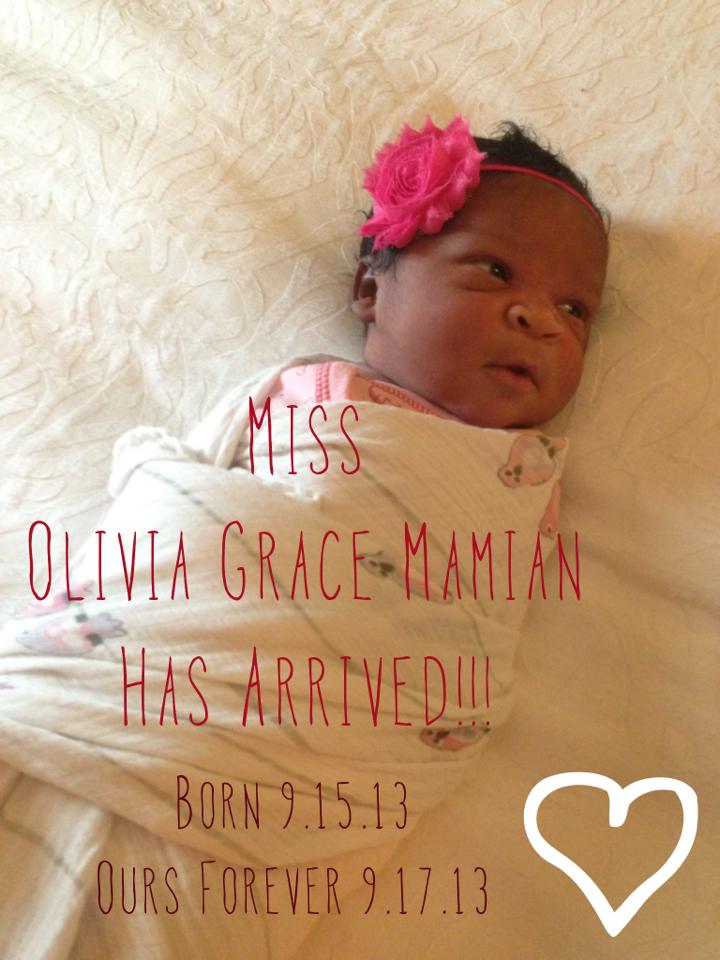 The birth family hugged and kissed us. They were so grateful for us and we were even more grateful for them. As requested by the birth mom once everyone was released we drove to visit the rest of the birth family including Olivia’s biological siblings. Her birth mom wanted them to meet her and also have a chance to say good bye. Even more so she wanted Olivia to have pictures to look back on one day so that she would know just how loved she was by them. That afternoon was beautiful and incredibly hard. It was also very necessary for everyone involved.

I am so incredibly grateful for my daughter’s amazing, brave and selfless birth mother. Her strength and love for Olivia is unbelievable. She truly wanted her to have the very best life and for that I will be forever grateful.

We send photos to Olivia’s birth family via text and I make several albums a year. As Olivia gets older we plan to make visits so that she can continue to have those important ties to her birth family. And, also to allow her birth family to remain having ties with her as well. 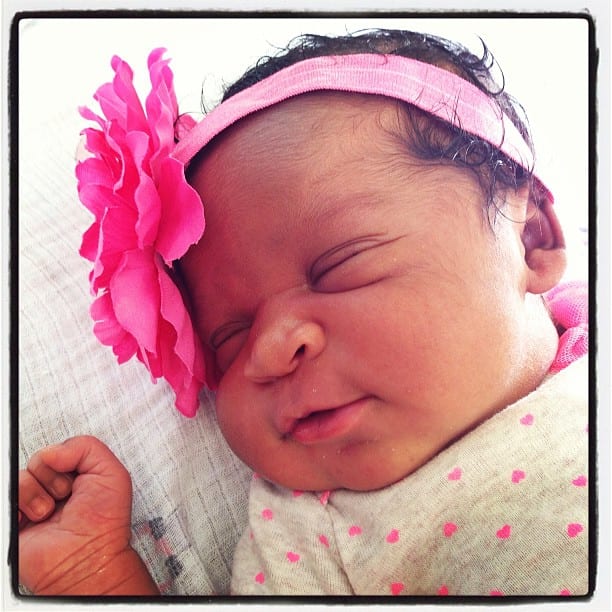 I know that not every adoptive family has this sort of experience but I want our story known. I want people to understand that birth parents are wonderful and amazing people and that open adoption is not something you have to fear. My daughter is LOVED by two families and sharing her is a true gift!!!

Have questions about adoption? Leave them in the comments. I return each one with a personal email.

What is the most kid-friendly destination you’ve

Need some holiday gift ideas for a 5-8-year-old? #

Let’s talk about hidden gems. Is there a place y