We got a late start after sleeping in. We had been exhausted after the amazing bike tour and visiting the Eiffel Tower the previous day. We quickly got ready and headed out the door to a cute little crepe shop next to our apartment. It was a happy break for me after all the pastries we had been having each morning. The shop owner/ chef made the crepes right there on the street. I had the ham and swiss and the kids opted for nutella/ banana (they don’t tire of sweets as easily I guess). 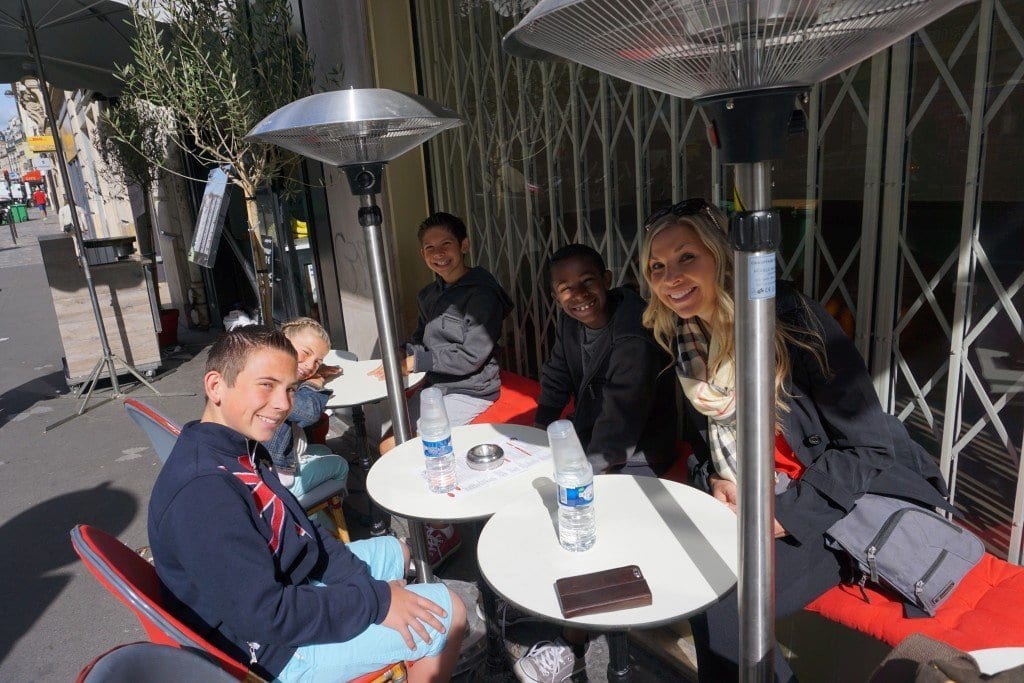 After breakfast we headed to the metro (again super easy and cheap way to get around) and then walked over to Love Lock Bridge. On the way we passed the obelisk we heard mixed stories about. One tour guide told us Napoleon stole it from Egypt and brought it to France and Egypt ever year since has asked for it to be returned but France’s reply is always the same- “No, it was a gift!”. And, another guide told us Egypt gave two obelisks to France and only one was ever transported all the way so France returned the second one. We don’t know which is true but the kids enjoyed pretending to be an obelisk just the same 😉 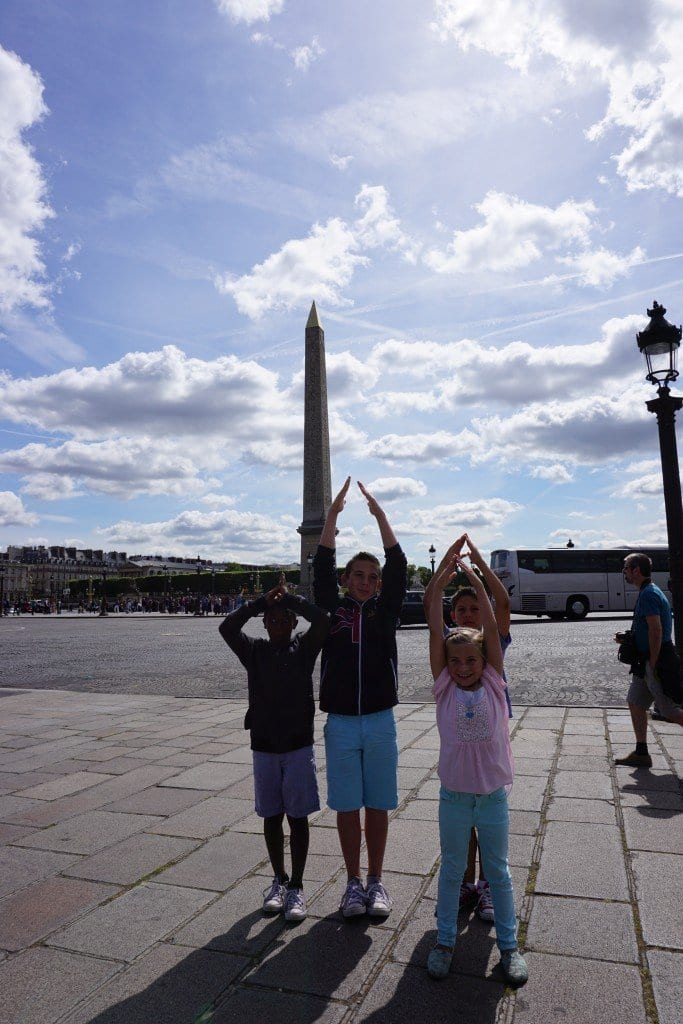 There are some beautiful views in this area of Paris over by the Louvre and Jardins Jardin. Probably, my favorite spot in France actually. Just take a look at that view with the River Seine, Eiffel Tower and that gorgeous bridge. Pretty awesome in right? 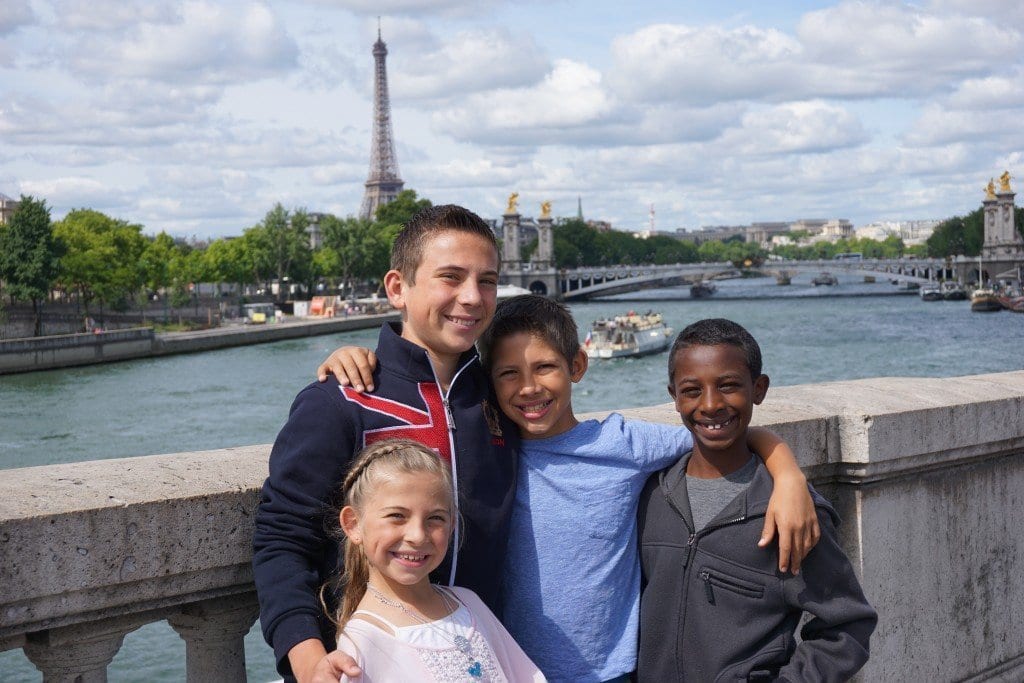 We had been told we HAD to do the love lock bridge thing and so we packed a lock with us in our luggage. Funny story though… there was an article the day we went to visit the bridge that said they were cutting down a bunch of locks that same day. So… I am not sure if we actually locked our lock on the “real” Love Lock Bridge or not?? Regardless we locked our love up somewhere 😉 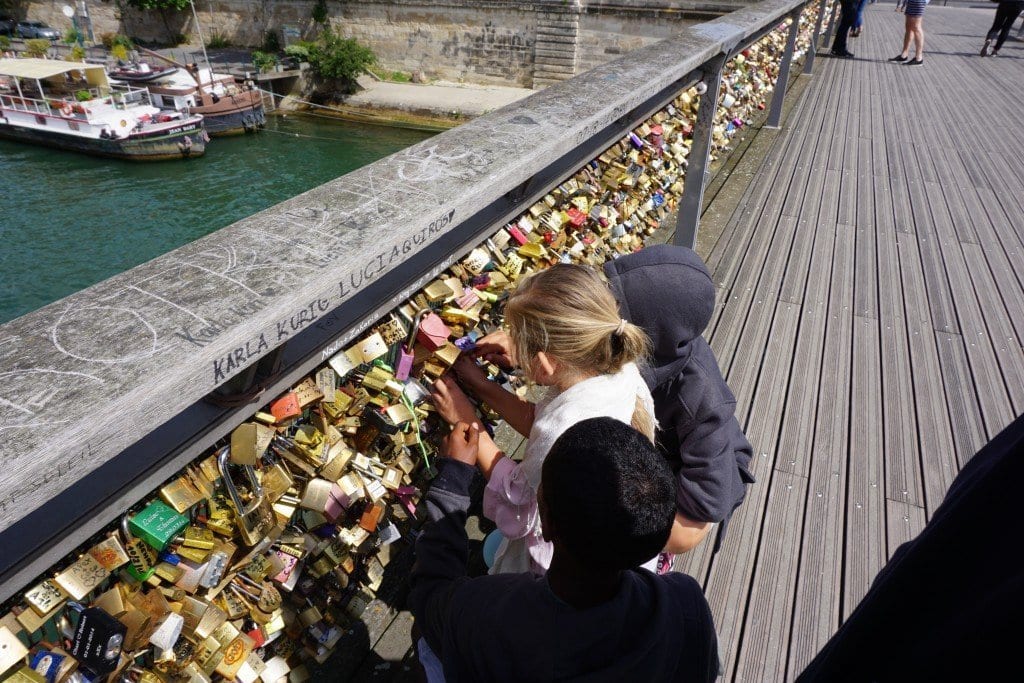 The kids loved looking through all the locks and reading the little messages on them. After a good 20 minutes they found the perfect spot (perfect = one they finally agreed on) and they proceeded to lock it up. There were two keys so we gave one to our son Shea bc he has always struggled with the fact that his place in our family is permanent. I think the shuffling around he dealt with early on has scarred him with a deep fear of losing us someday. The other key we gave to our daughter because Paris is her absolute favorite place in the world. She has been obsessed with it long before we traveled there. 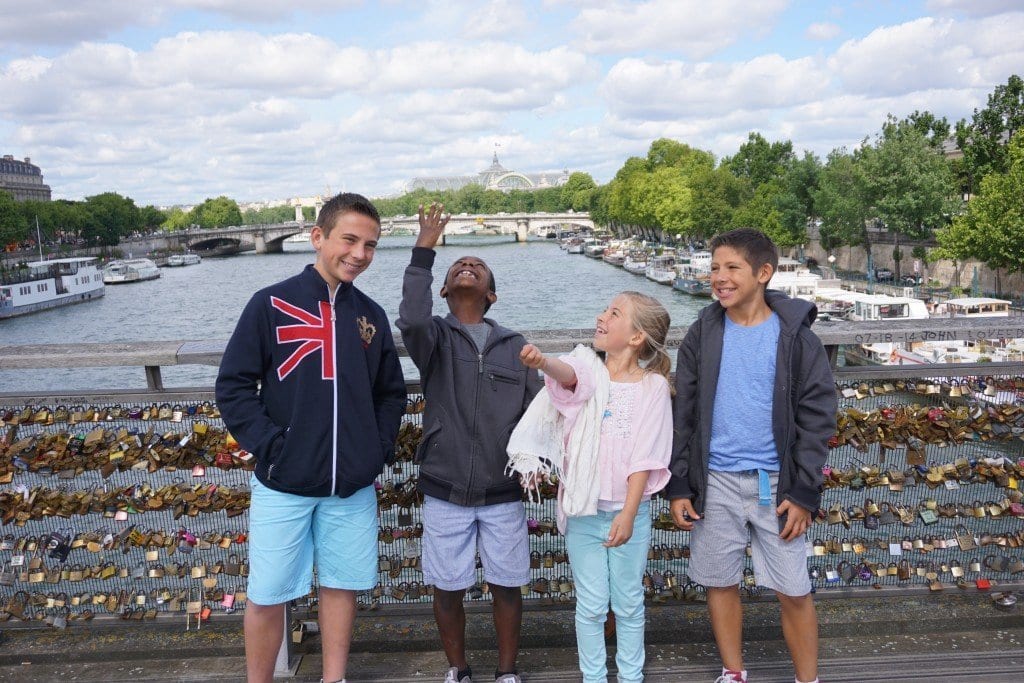 One… Two… Three and away the keys went meaning we locked our love up and it will go on forever and ever. 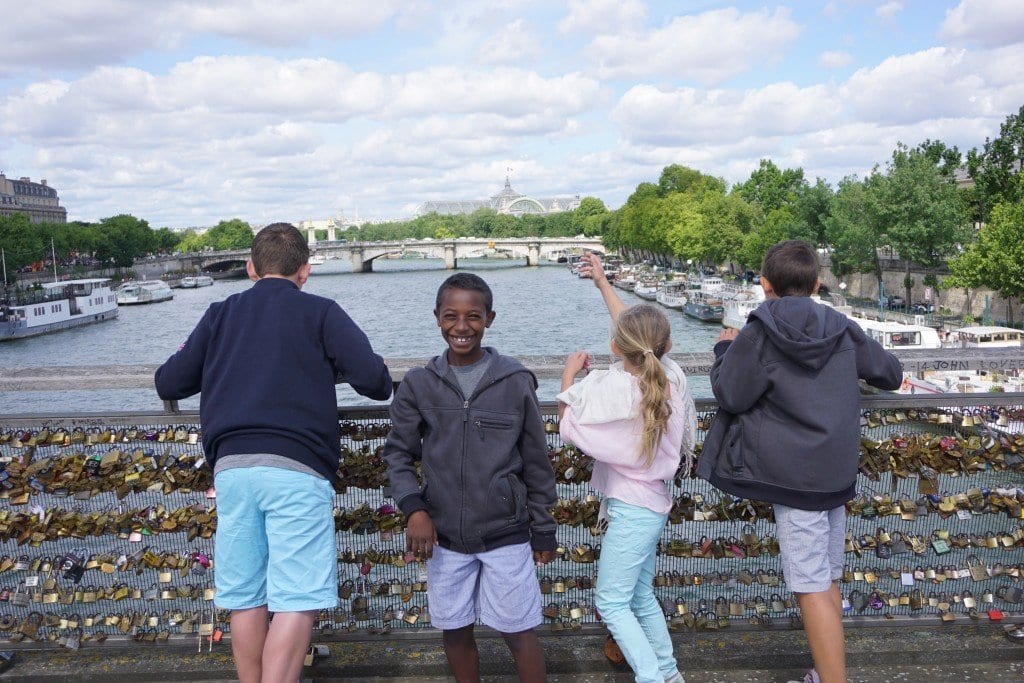 Look at this sweet boys face… honestly that moment changed him. He has walked around with a new sense of permanency and belonging that he has never had before. That is one crazy thing about traveling. You bond in ways that just aren’t possible amongst the normal every day chaos and shuffle that life entails. Our travels have brought us so much closer to each of our kids. But, I notice the traveling and bonding has played a very special role in helping us attach to Shea and him to us. He has been in our family for 5 years now and I can finally say that just recently he has really started to feel comfortable. Bless his sweet heart!! Every child deserves a family without fear that they will leave them 🙁

After we finished up at Love Lock Bridge– or a bridge with locks- who knows? We headed across the street to Jardins Jardin where we had strolled on the bike tour yesterday (Fat Tire Bike Tours- Paris they are the BEST!!). We found a cute little park and I loved that it had al the playground equipment that I used to play on as a child. Metal slide, carousel, teeter toter… it was awesome. This park was another highlight of my time in France. The park was filled with traveling families speaking all sorts of languages. I loved watching and listening to all the kids play together. Kids are so universal… they don’t let differences or languages stop them from playing and having a good time. So sad that we teach intolerance. Kids just get it! Us grown ups could learn a few things from them.

After the park we ate lunch at the same spot as yesterday… ordering the exact same dishes pretty much. You just can’t beat their location & delicious food. Our waiter noticed we were Americans and he told us his dream was to go to San Francisco. The kids thought this was the coolest thing… here they were on their dream vacation and the waiter wanted to be in their home state 😉

Once our bellies were full we met our guide from Context Travel for our Family Louvre Crash Course Tour. We had loved our Context Travel Tower of London Tour and so we were excited to be touring with them once again. As expected we easily met our guide at the location specified and headed into the Louvre. 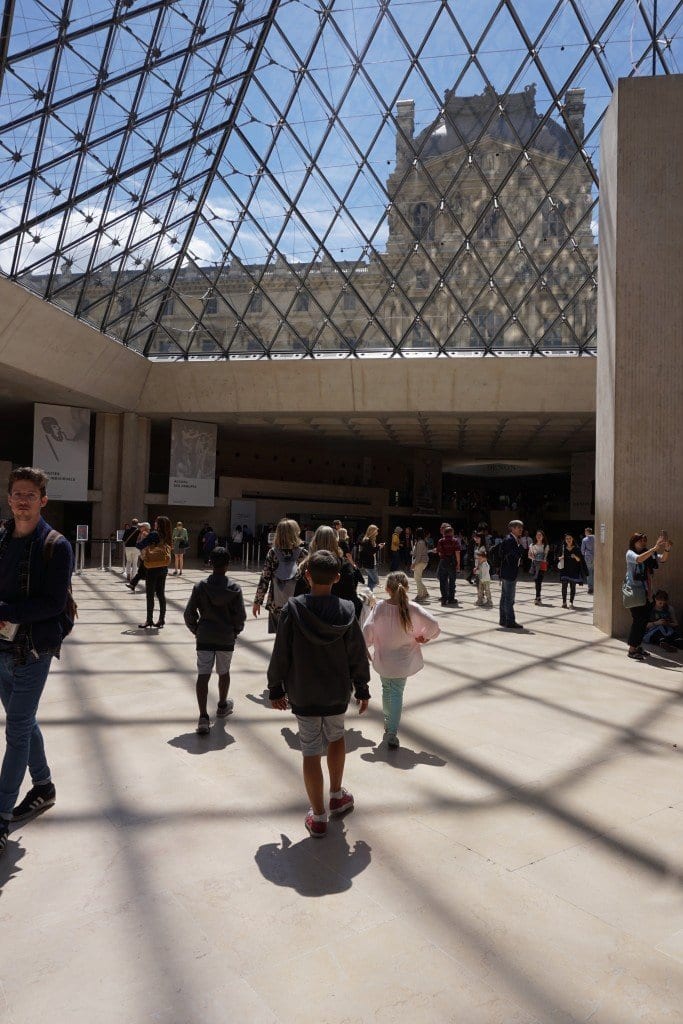 Some things I had not prepared for were how HOT it was under that glass pyramid and how massive and crowded it would be inside. I was immediately so thankful to have a guide. I could just imagine the tantrums and stress that would have ensued if we had tried to make it through that museum by ourselves. I am certain we would have been lost most of the time! I HIGHLY recommend booking a guide if you choose to visit the Louvre and  Context Travel is an excellent choice. You will know you are with a professional docent who has a great deal of background and is experienced in educating and entertaining you (and your kids). Trust me to walk around that massive building without a care in the world just soaking up the knowledge and art is an amazing experience! 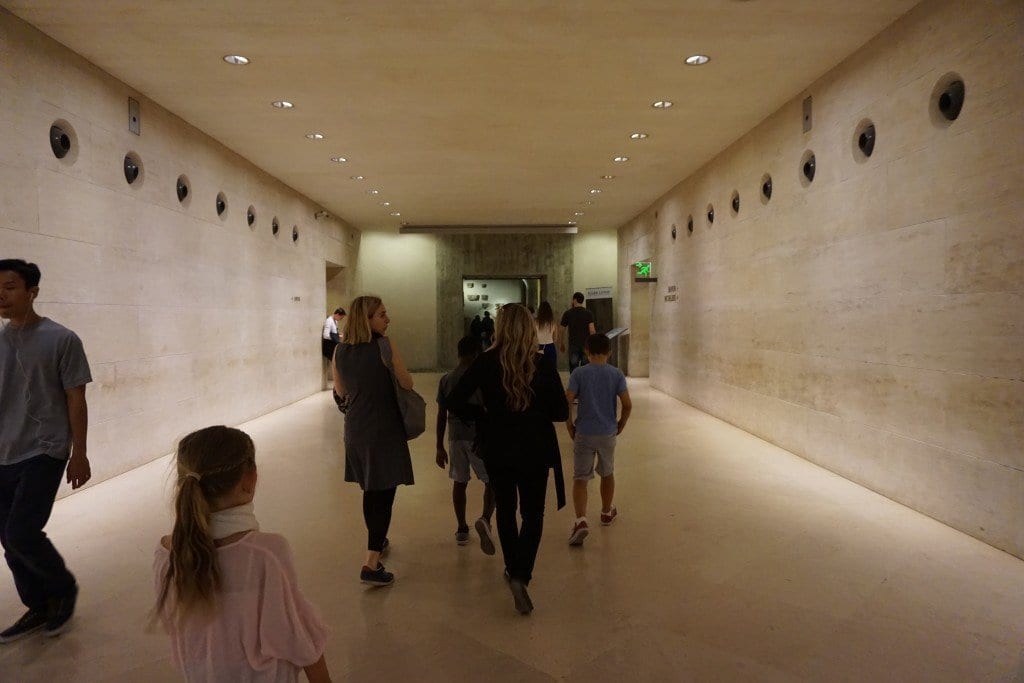 One of my favorite things I saw in the Louvre was the giant fortress that was uncovered when they built the glass pyramid in the 1980’s. As you can see below they found an entire fortress in great condition just lying under the museum. How cool is that? 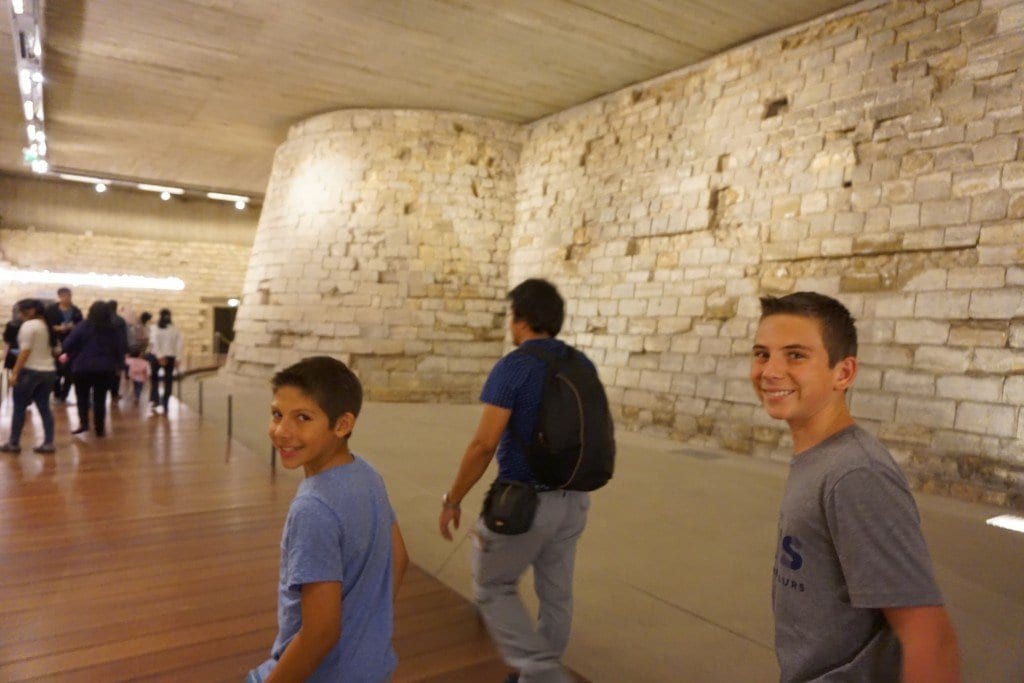 Our guide explained how the fortress once looked using her iPad so the kids could get a better understanding of what they were looking at. It was incredible to look at the screen and to think we were standing right there in that same space that had existed in the medieval days. 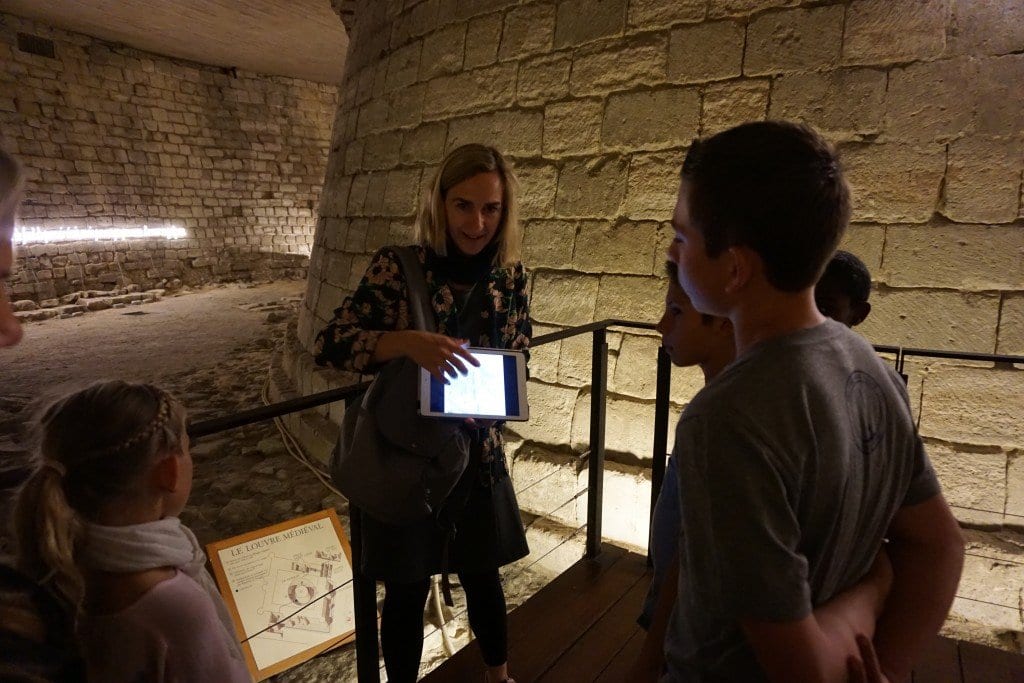 It is hard to capture the massiveness of the Louvre in a picture. Although, the guide said if you were to look at each piece for 30 seconds it would take you more than 30 days to get through the museum… it’s that BIG! But, so gorgeous and so much fun to walk around. 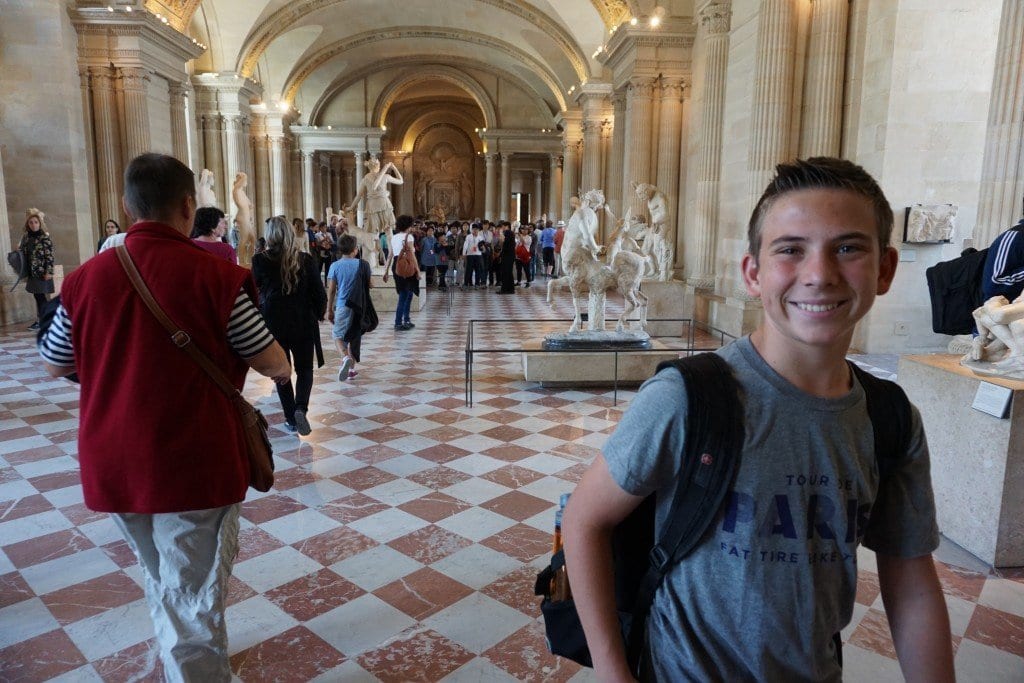 Our daughter was so excited when our docent was asking the kids who they thought the statue was below. She had recently done a report on the Greek Gods and Goddesses and was eager to share her knowledge. And, she nailed it… in case you didn’t know that is the lovely Aphrodite. Archeologists found a hand holding an apple near where the statue was found and there are marks on the statue’s head and arms where there once had been a crown and jewelry. 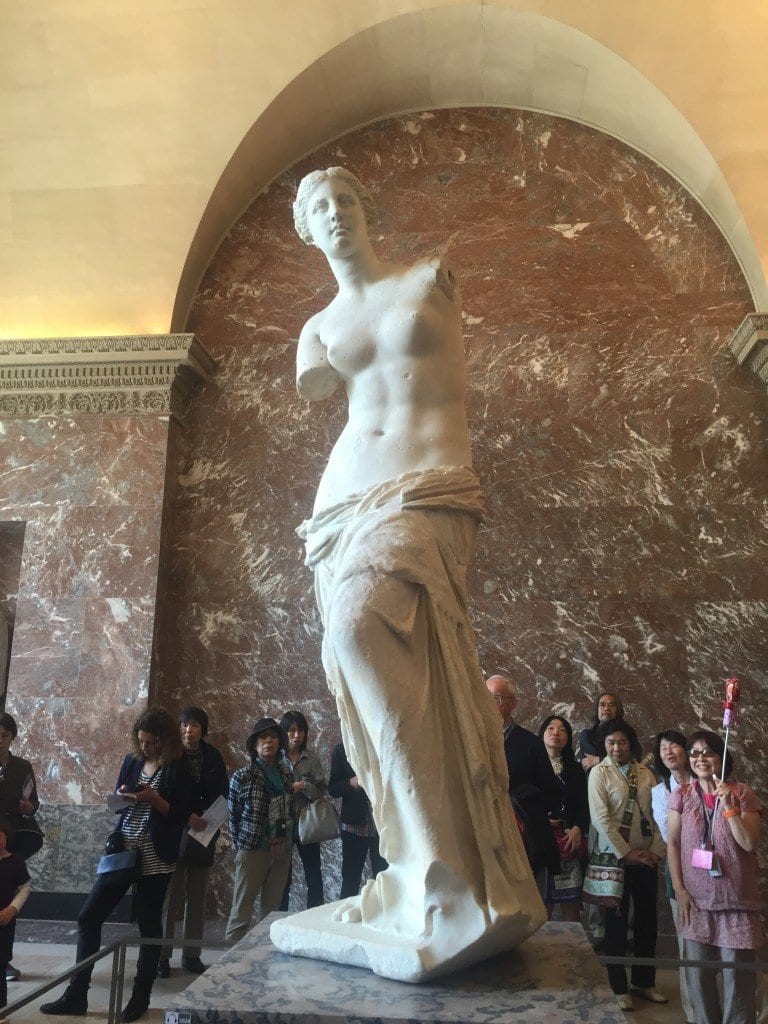 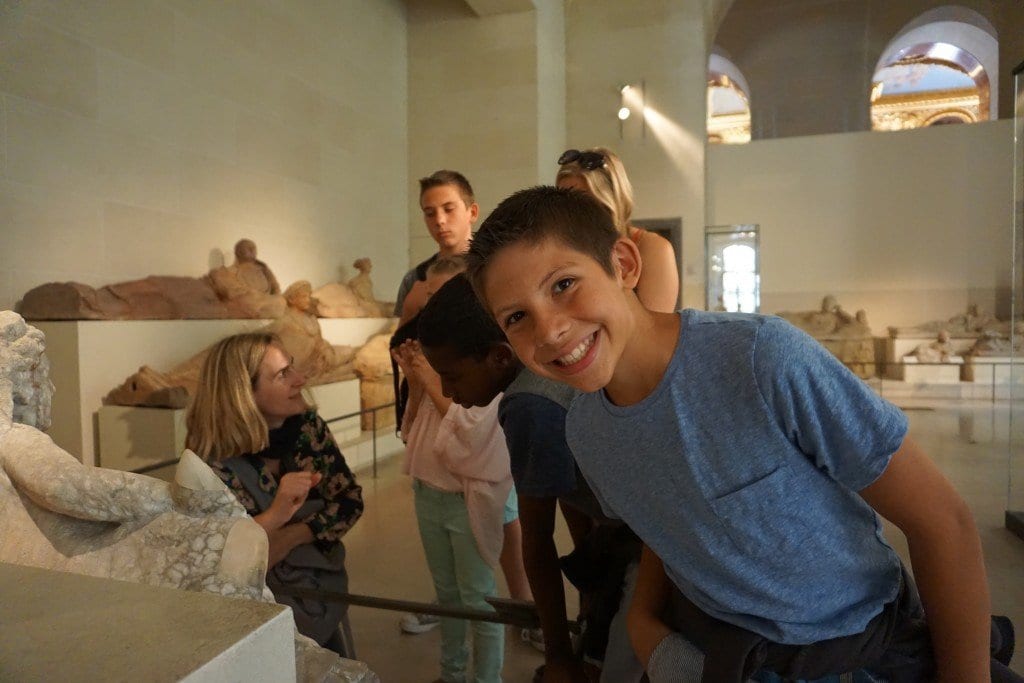 Another fun fact that I learned from our docent was about the Botticelli fresco below. It was found in a home and so the family called in a professional who quickly removed the fresco and paid them for it… not telling them it was an original Botticelli. The Louvre found out what happened and paid the thief and the family and now the fresco lives at the Louvre. But, the thief damaged the fresco when he removed the painting so hastily. See the chunks missing below. 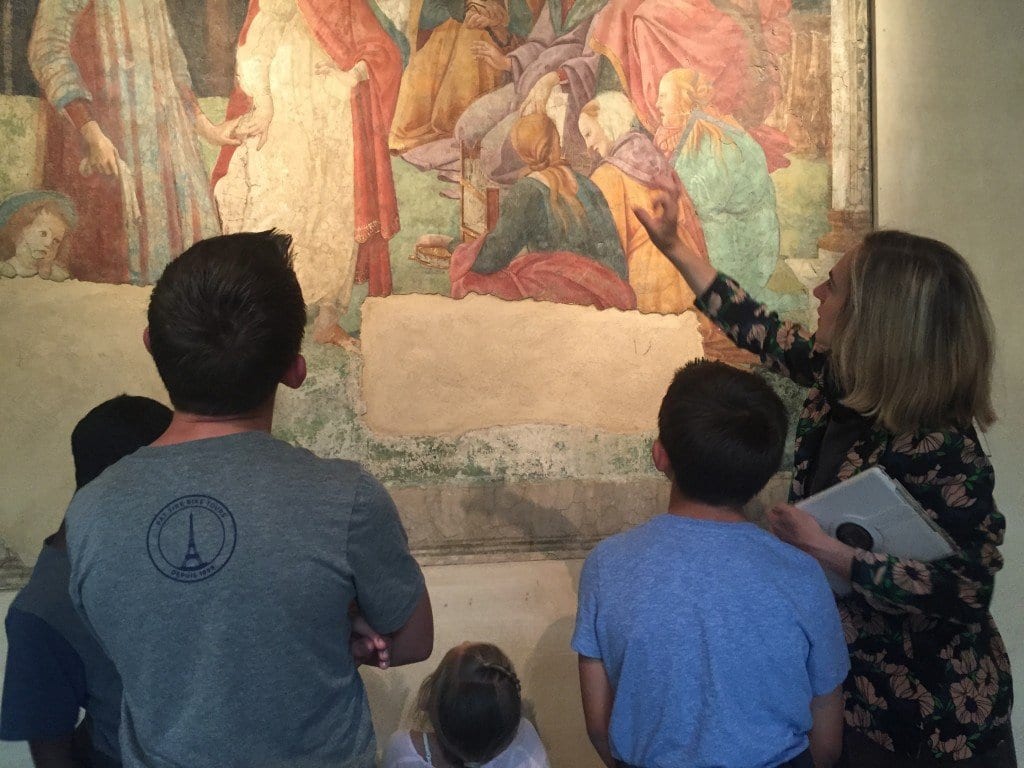 After 3 hours in the Louvre we called it a day and said good bye to our wonderful docent. We learned so much in those three hours and I know the kids will be reciting things they learned from her for years to come in their classrooms. Traveling really does give kids a much deeper interest in history and culture. I am very thankful we have the ability to take the kids to such amazing places. And, also so thankful to all the wonderful guides we meet along the way. They have truly impacted my kids lives in such an amazing way. 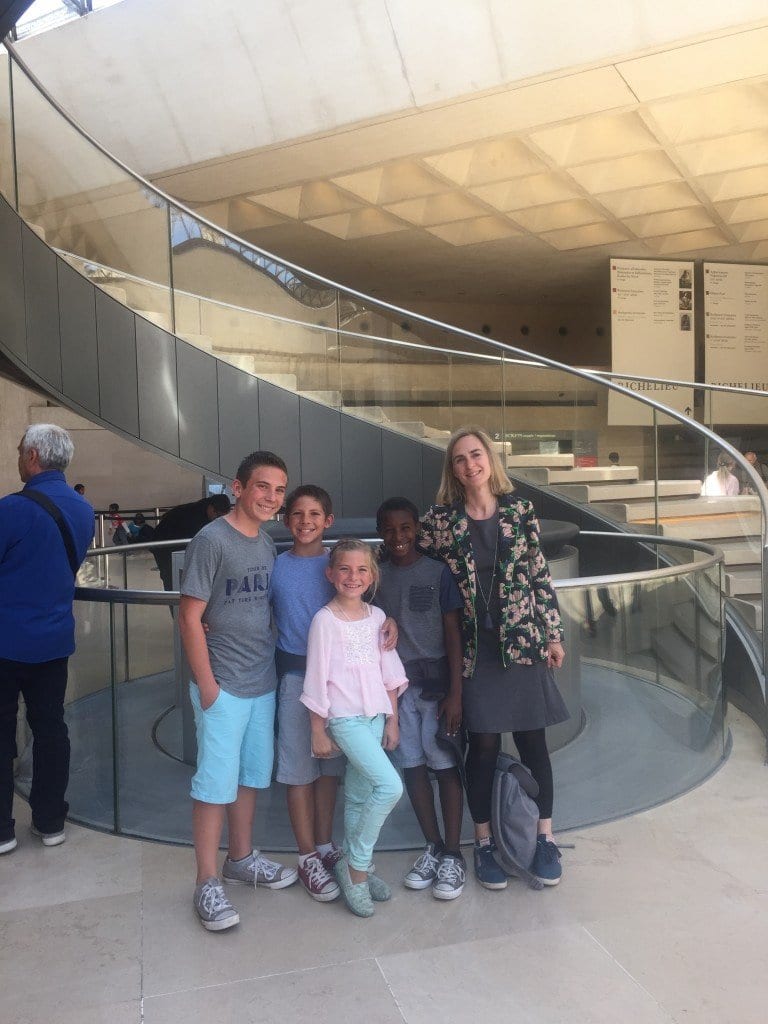 We couldn’t leave without stopping to wait in line so we could take turns standing on the little crates outside for the obligatory Louvre tourist photo opp… so cool! 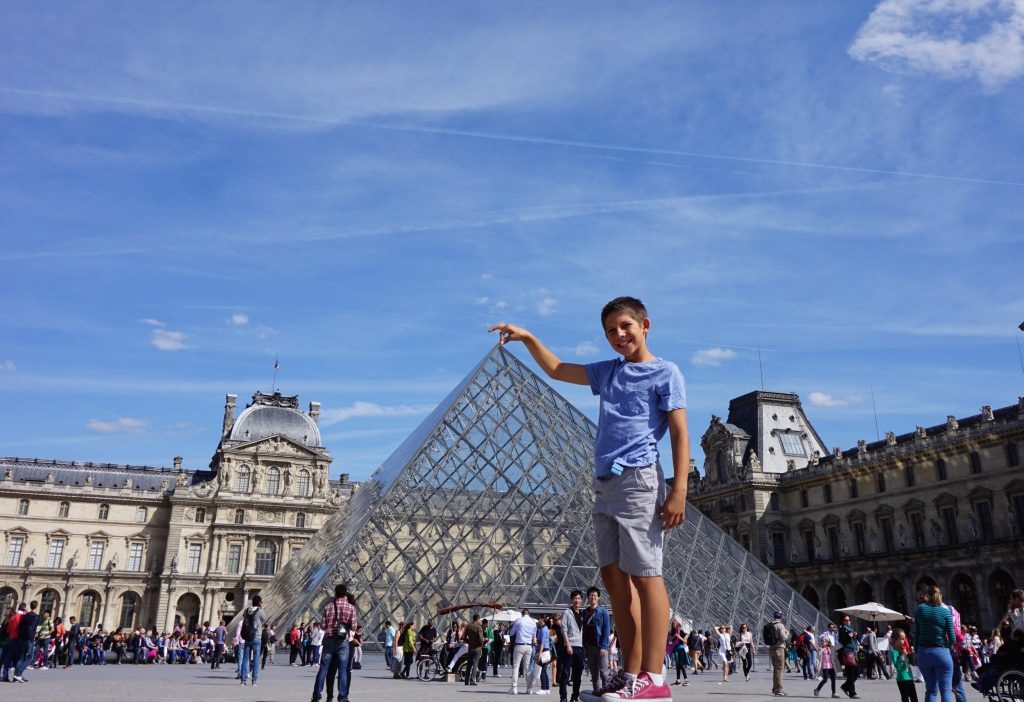 NOTE:  WE WERE GUESTS OF CONTEXT TRAVEL. WE RECEIVED A COMPLIMENTARY TOUR FOR OUR FAMILY IN EXCHANGE FOR MY EXPERIENCE AND HONEST THOUGHTS. ALL OPINIONS ARE MY OWN.