Whenever I visit Rome I make sure to pack my stretchy pants because it is IMPOSSIBLE to resist all the amazing pizza, pasta, cheese, wine and gelato that are around every corner. So, what better place than Rome to try my very first food tour? 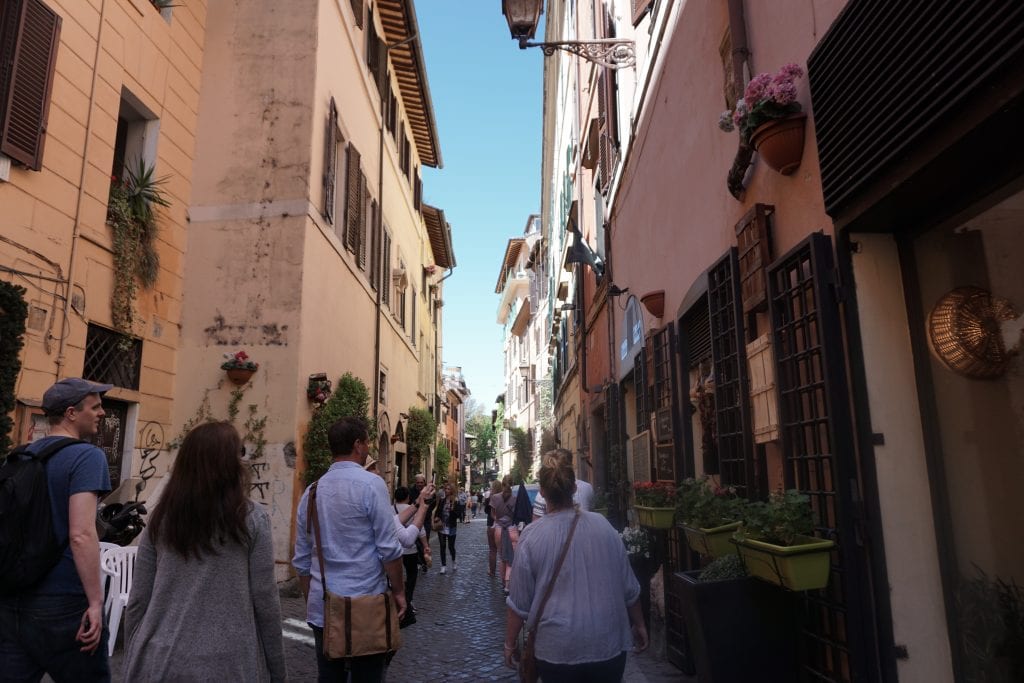 I found Eating Europe Tours, as I do many of my activities, on Tripadvisor. They stood out with their 5 star rating & over 2500 outstanding reviews. Eating Italy offers several different food tours in Rome (as well as several other countries- watch for my Prague post soon too). But, for our quick trip the Daylight Trastevere Tour fit perfectly in my schedule. The Daylight Trastevere Tour boasts 10 stops during a 4 hour long walking tour through the adorable little town called Trastevere in Rome, Italy. I had never been outside the center of Rome and I was pleased to find a more quaint & quiet residential neighborhood where I could truly see & experience some authentic Italian culture.

The tour began at a cafe called “Antica Caffeteria” where we met our tour guide Anna. Anna was originally from Boston although you would never guess as she has been living in Rome for over 11 years and has more of an Italian accent than a Boston one 😉

As soon as everyone from our group arrived we moved on to our first tasting stop, Pasticceria Trastevere. This adorable Italian pastry shop is owned by the charming Signora Vera who has been running her pastry shop since the 1970’s. She makes every thing fresh every day and you can tell. Each pastry sits on the shelf like a prize ready to be won. 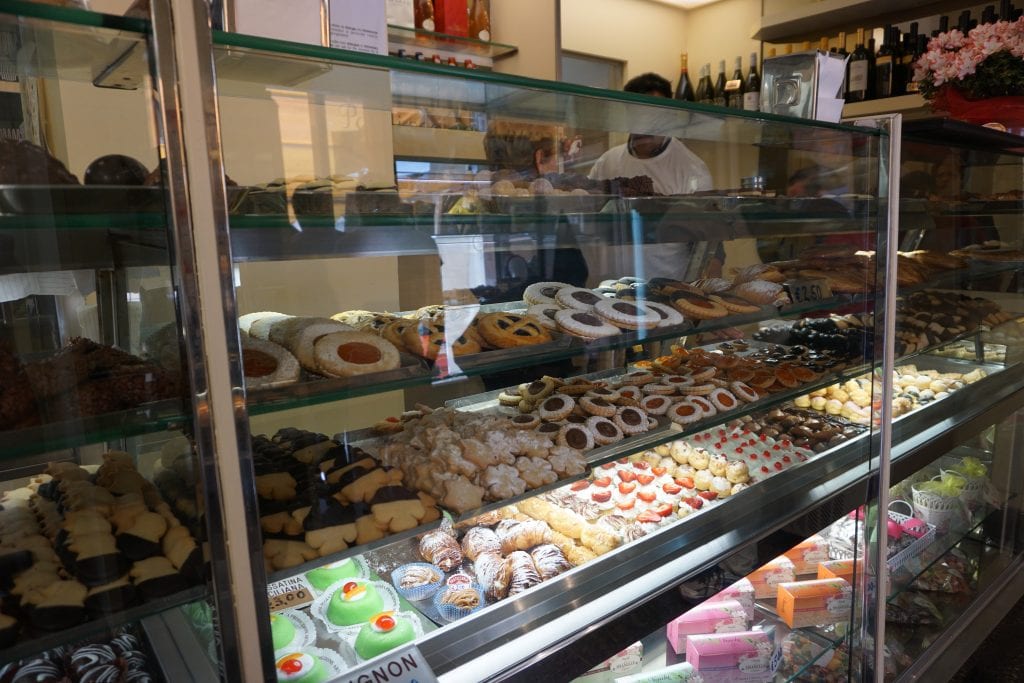 We were able to try her specialty- beignet choux pastry bun filled with zabaglione cream. It was OUT OF THIS WORLD! It was the absolute BEST bite I had in all of Italy. I wanted to take a huge box back home with me. I wonder if Signora Vera has ever thought of offering classes? If she does I would be the first to sign up! 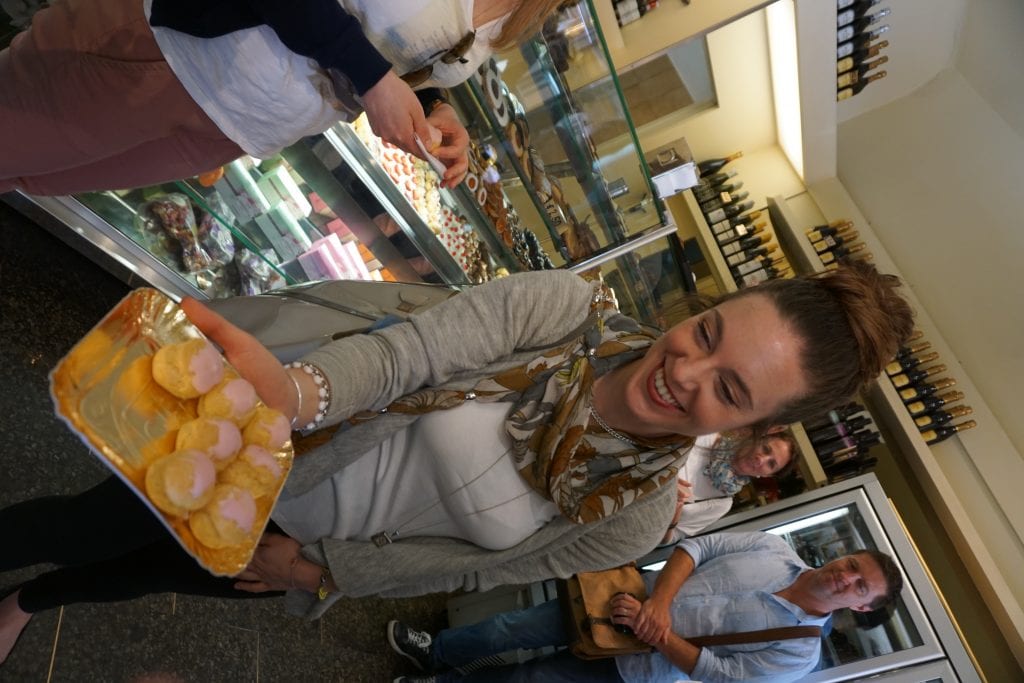 I thought it was a bit odd to start a tour with dessert but our lovely guide, Anna explained that they wanted to start off the day like the Italians. She informed us that the Italians joke that an Italian breakfast includes an espresso and a smoke. She said truth is, that statement is pretty accurate with the addition of maybe a sweet treat.

After our pastry we moved on to Signor Roberto’s Antica Caciara. This cheese, cured meat and salami shop is famous in Trastevere. It has been in the Polica family since 1900. Here you will find many fine restaurants purchasing wheels of pecorino romano cheese as he is known to have the best! We tasted his prosciutto and famed cheese both of which were divine. 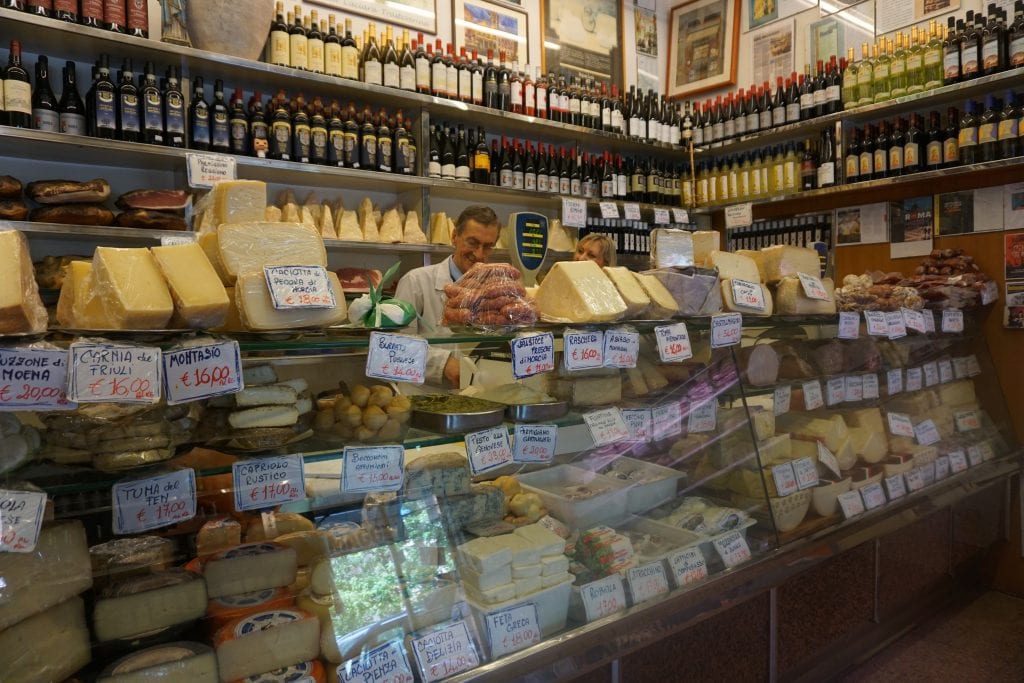 Next up was a Roman street food favorite called “suppli”- a rice ball fried to perfection filled with tasty tomato based sauce and a hunk of gooey cheese. Yes! It tastes as good as it sounds and looks (see below). 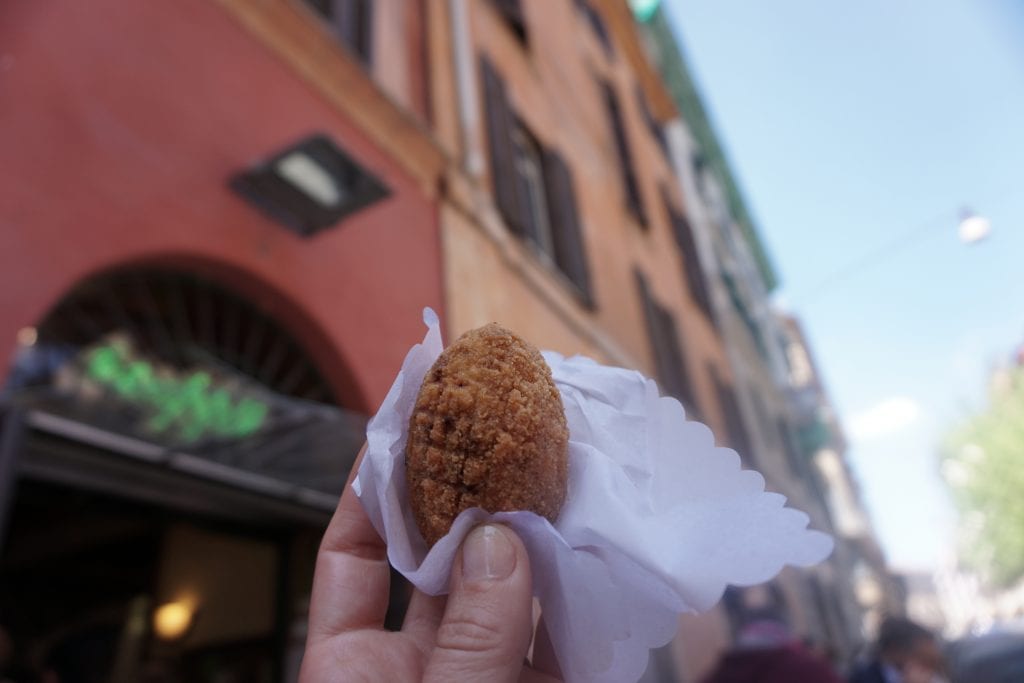 After devouring the first few tastings I was a bit nervous at where I would put the rest. But, Anna assured me I would be fine. And, she was right!

We took a stroll before we reached our next destination- a traditional pork deli known in Italian as a Norcineria. The staff inside this adorable deli seemed like they had been cast by a movie director. Loud, funny Italian men, looked after by their 92 year old grandmother at the register. 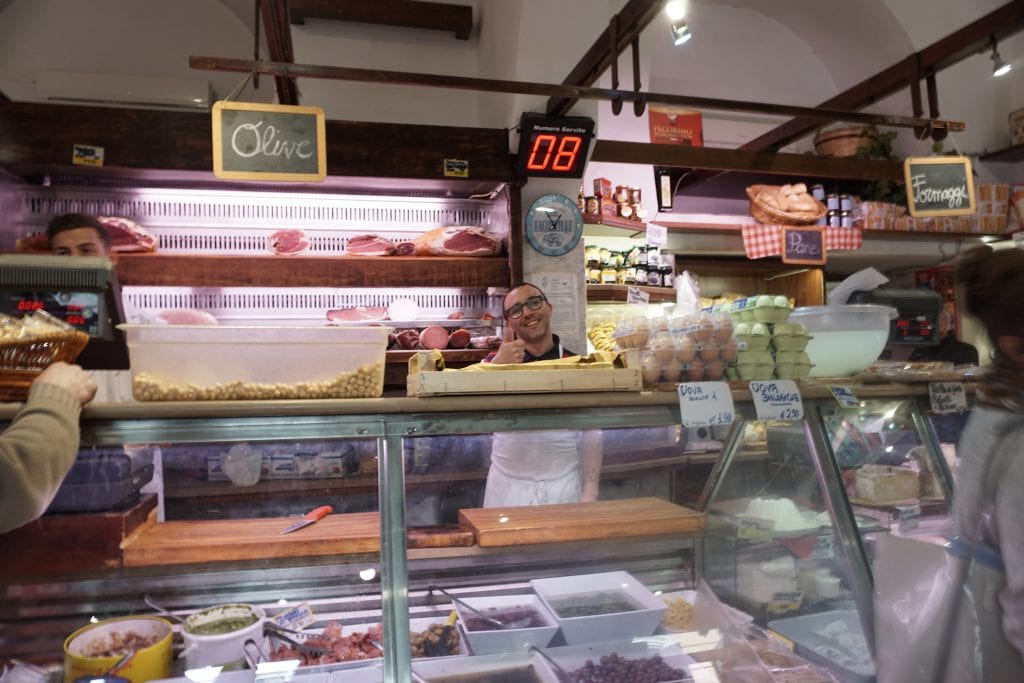 There were sausages, meats, cheeses and fresh baked bread. But, we had come for their specialty- “porchetta”. This delightful sliced meat has been prepared the same way since ancient times and it is no surprise after taking my first bite. Robust with flavor and paired perfectly on top of their fresh pizza bianca.

I learned that pups in Trastevere are allowed to go everywhere with their owners because their living space (typically small apartments) are too small to contain the dogs all day. One of the customers at Antica Norcineria had his 3 golden retriever pups with him. I felt so bad for the dogs that sat so obediently outisde the door drooling while I devoured my savory porchetta. Aren’t they cute?? 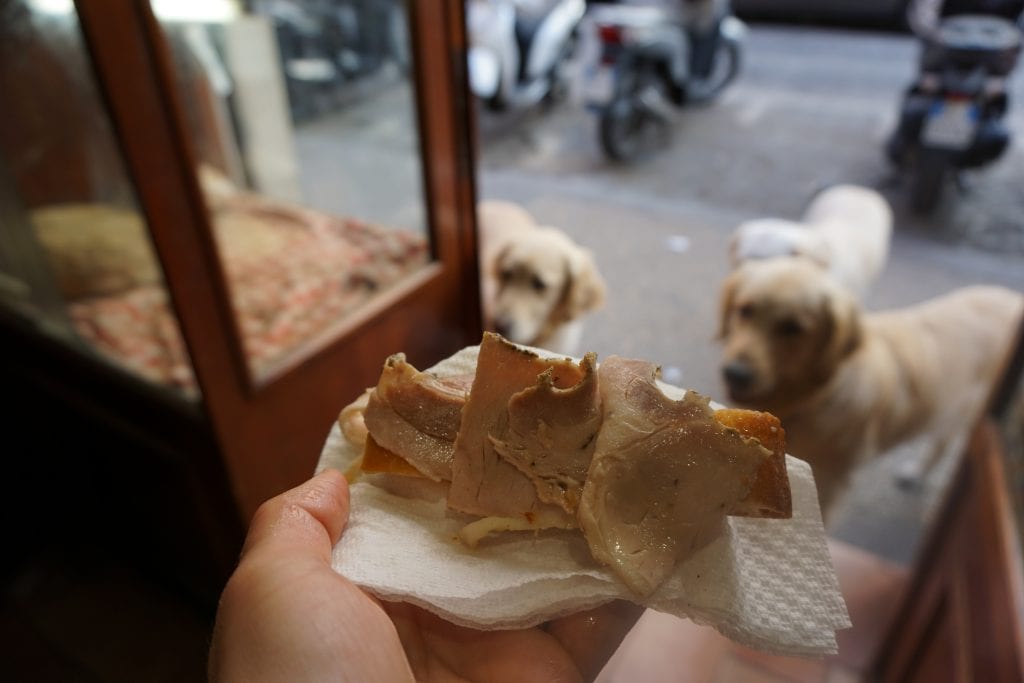 Talking about tight living quarters, Anna also informed us that most people in Italy shop every day for their food. Mainly because they don’t have the space to store much food. But, also because it has become part of their culture. The shop owners know their customers. They offer recipe ideas and tips on preparation etc…

One example I witnessed was listening to Concetta, who runs a fruit and vegetable stand at the San Cosimato Market. She was able to help a customer buy fruit that would be ripe in 2 days when the customer planned to have a picnic as well as offer up a recipe for tomato sauce when the customer was purchasing her vegetables. I was so intrigued and saddened that back home in America these types of markets have a difficult time thriving.

Concetta teased that she had been born in the market and her story actually held some truth as her mother used to run the stand and her water broke while she was working. We laughed at Concetta’s story, flipped through some old pictures she brought out to show how the market had changed over the years.

Then Concetta asked us to try her fresh peas. They were absolutely amazing!! After that she handed Anna a tray of fruit and we walked across to Adamo and Emiliano to pair our fruit with some of their international and local cheeses. Sitting under the warm Italian sun chatting and tasting. It truly is no wonder these people choose to live here. 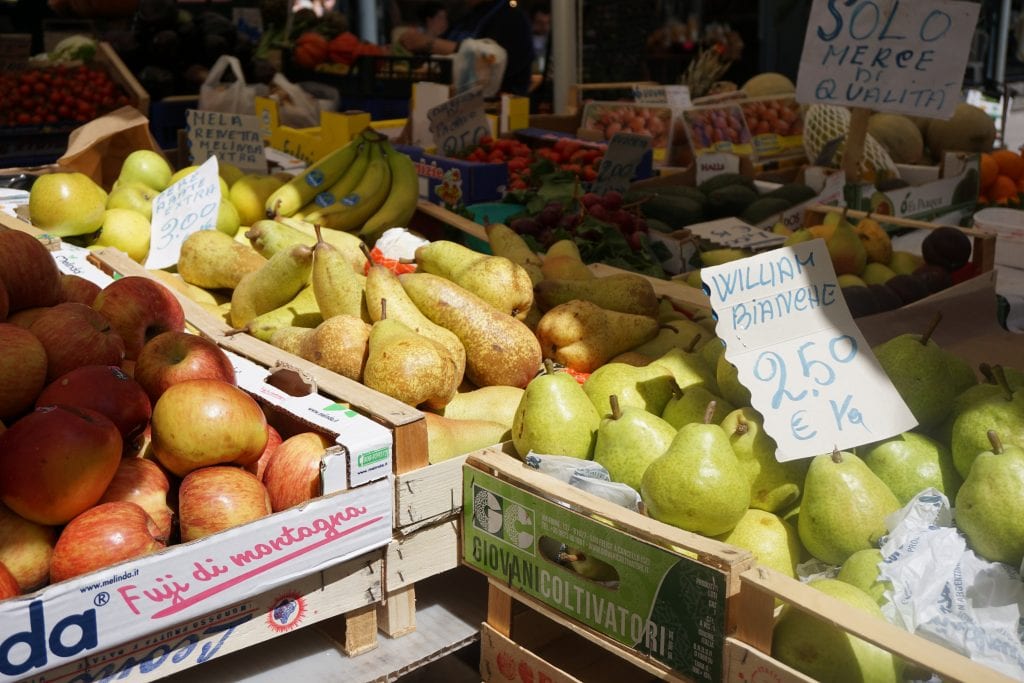 The market was a nice break from eating. We sat for awhile and then walked a bit through Trastevere to our next stop, Fatamorgana.

The Best Gelato Ever!

Fata is a graduate from the very school that brought gourmet and organic gelato to Rome. She is experimental to say the least and lucky for us because she comes up with the most amazing flavor combinations that awaken & excite your tastebuds. My choice was a blend of chocolate, bourbon and tobacco inspired by Kentucky. It sounds odd but it was honestly the BEST GELATO I have ever had!!! 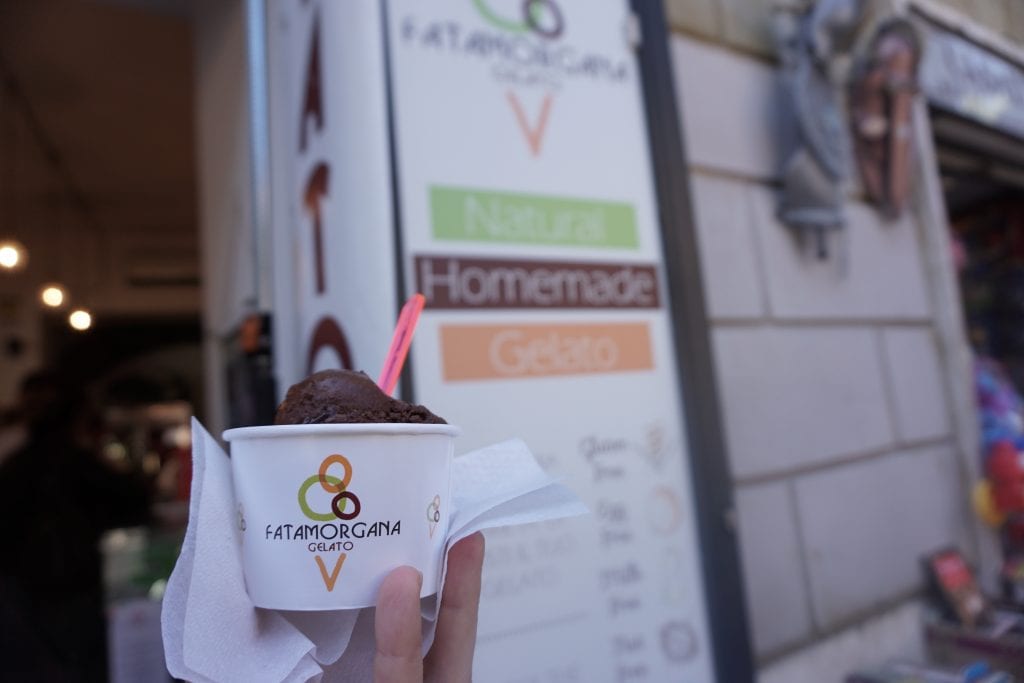 After scarfing down our delicious gelato we continued on to our main meal {laughs hysterically} which was a delicious trio of traditional pasta dishes paired with a local red wine from a lovely restaurant run by two sisters- Lina and Maria called Enoteca Ferrara. 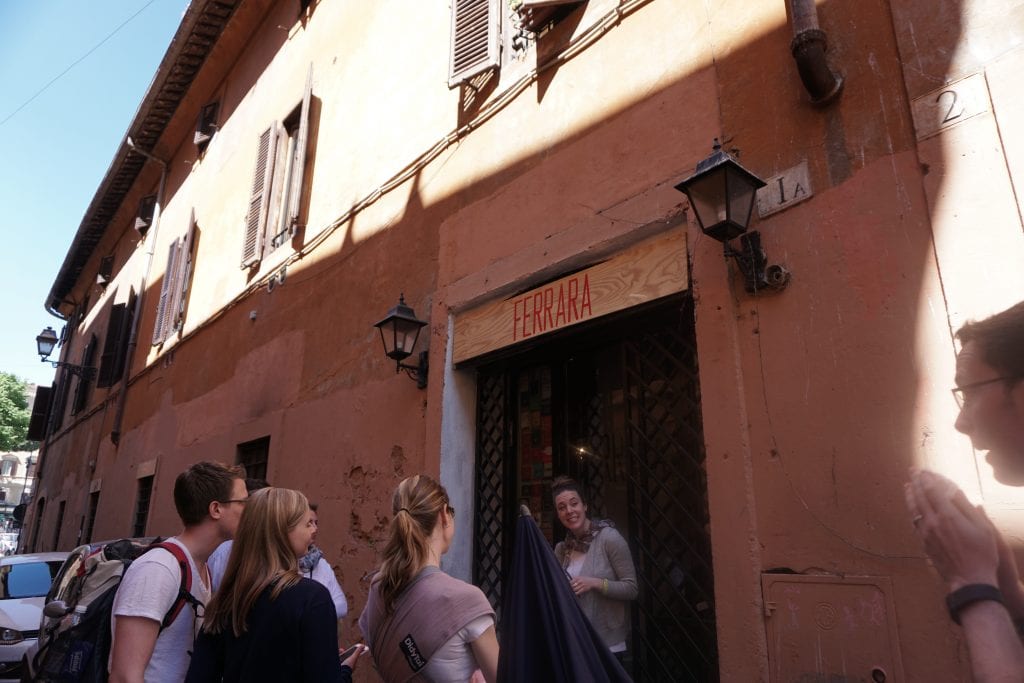 I learned all the reasons Italians serve their pasta al dente. I found it very interesting that among other things it slows down digestion and makes you fuller longer. Nice to know! My favorite pasta at Ferrara was the pesto. Their sauce actually included a potato to make it even creamier– it was perfect! 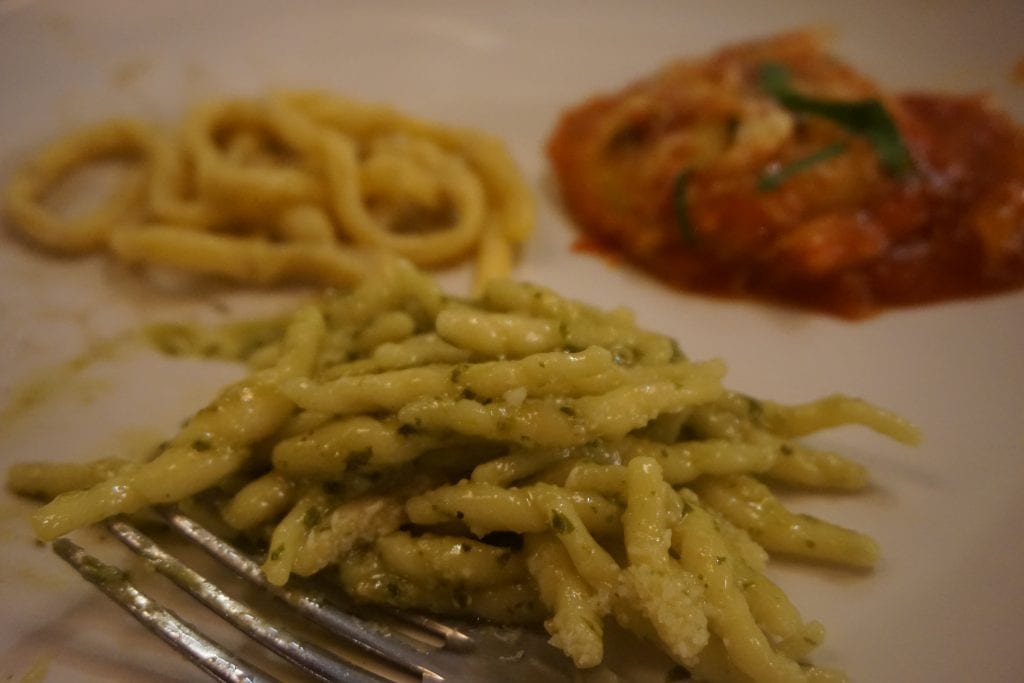 After our main meal it was time to move onto our first dessert stop! (I suppose gelato was a snack- ha!)

We found ourselves at the adorable Innocenti which has been in the Innocenti family since 1920. The restaurant owner joked that its the same biscotti’s they have been making since that time period as well. And, I can see why as they absolutely melted in my mouth. We tried two cookies a shortbread with a fruit filling and a hazelnut meringue type cookie which would be perfect with a cup of coffee.

Talking about coffee… I would have loved to have some coffee on the your since Italy is known for their amazing coffee shops. Do you know that Rome has been able to hold back on Starbucks… you won’t find a single one. Impressive!! One of the only countries I have ever visited not to. Which is welcomed since that means they have a wide variety of small wonderful coffee shops throughout Rome. 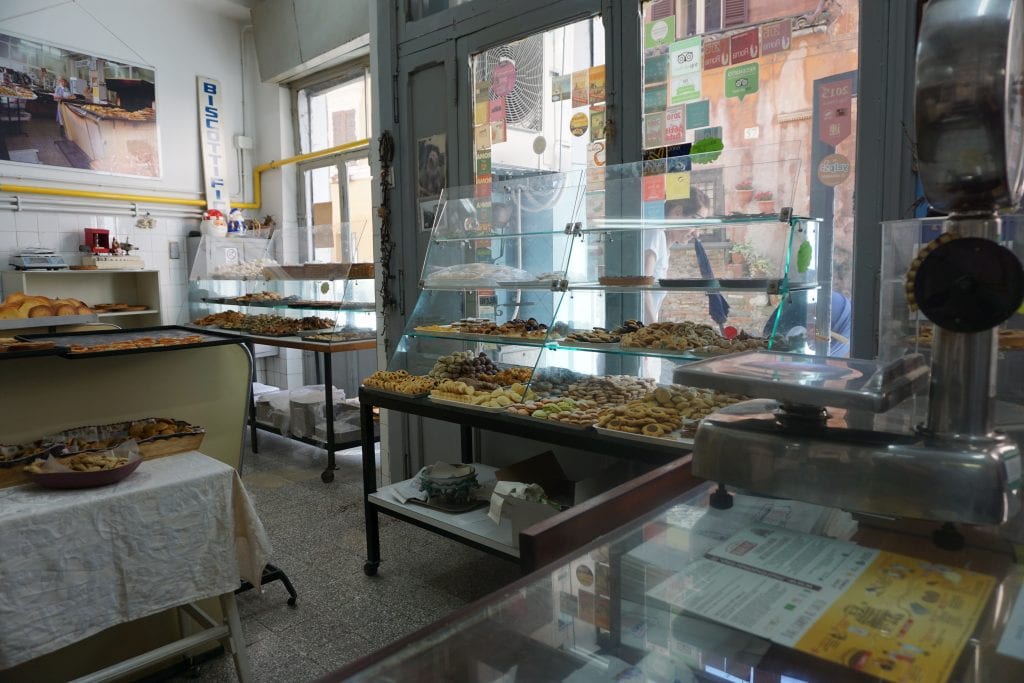 We ended the tour at Spirito de Vino with a wonderful pairing of dessert wine and creme brulee. As you might notice this creme brulee was a bit different than we are used to seeing in the states. It is missing the caramelized sugar topping and I actually preferred it this way. We were told it was the original creme brulee recipe that used to be served to royalty… so I guess I have good taste 😉

After our final meal we were invited to a very exclusive offer to head down to Spirito Di Vino’s wine cellar. The restaurant is built inside the oldest standing mosque that still has its four original walls making it older than the Colosseum. Quite the unique experience! 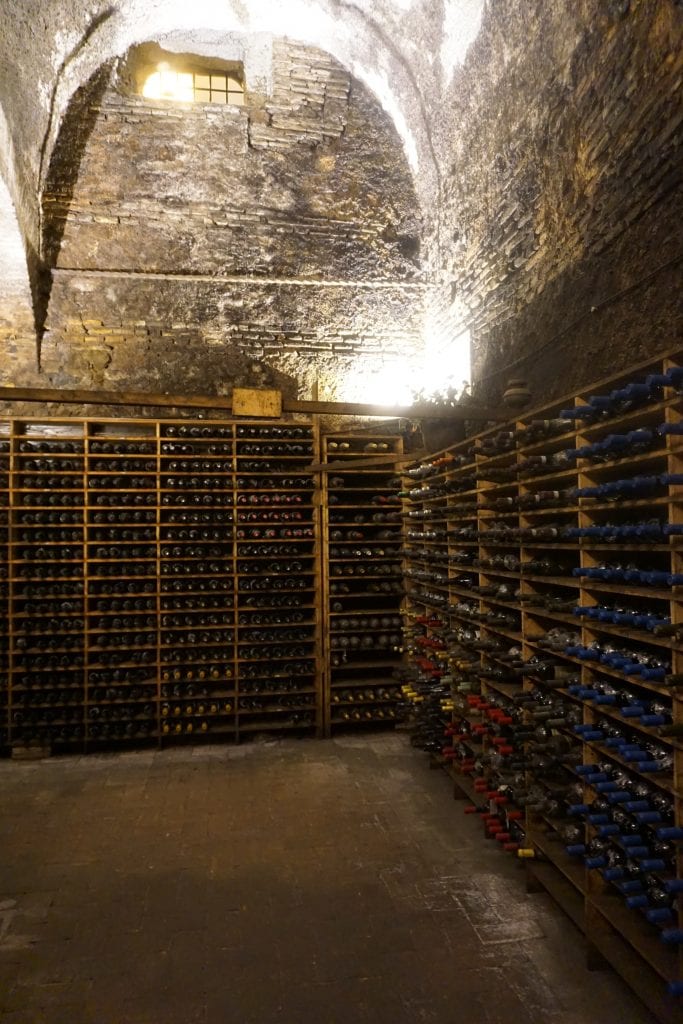 I would highly recommend this tour to anyone visiting Rome. I think it is a fantastic way to learn about the culture, get to discover a new neighborhood and try some amazing food. If you want to get an inside peek of the Best Food Tour in Rome check out my video below: 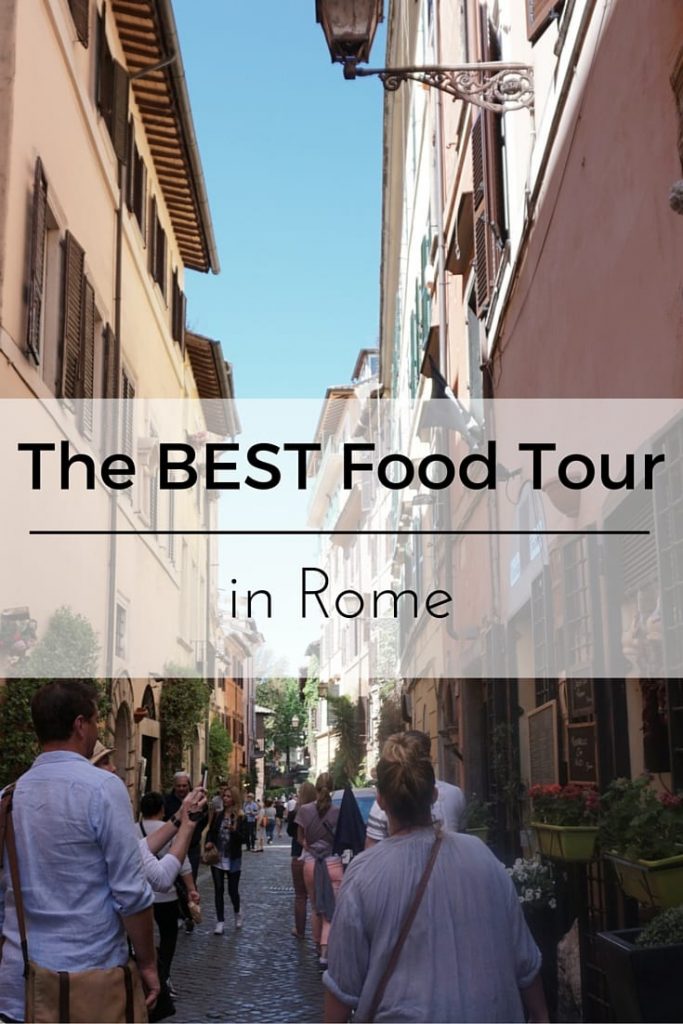